Thank you for the email. I do know a bit about this frame as I designed it and managed the production.

A little history, I was hired on a one year contract by Kastle in 1989 to work at the Hohnems plant, basically to re-design their entire bike line for 1990. I had met the Kastle management in Tiawan the year before (I was a VP of Engineering for a bicycle manufacturing group there). In 1990, Kastle was acquired by Benetton, for its then &#8220;Nordica Sportsytem&#8221; division, and I was asked to move to Italy and work full time on the Kastle bike line for Benetton. Mr. Luciano Benetton was a bicycle enthusiast and had tried to purchase Campagnolo , un-succesfully, a year prior to buying Kastle. Part of the deal for me to move to Italy was the creation of the &#8220;Dan Falvey System&#8221;. This was offered to me with complete control of the Kastle bike line design, manufacturing and engineering details. The only detail I wasn&#8217;t responsible for was the paint and decal design, which was done by a graphics department inside Benetton.

The &#8220;Dan Falvey System&#8221; was based on my prior experience in the bicycle industry as an engineer, frame designer and frame builder in the US. I grew up road and track racing and working in pro level bike shops in the San Francisco bay area. I race against Tom Ritchey, as we are the same age, and he was a better climber than me&#8230;anyway, I got involved in the mountain bike culture very early, with the the likes of Gary Fisher, Charlie Kelly, Bontranger, etc&#8230;all friends. I started a company in 1980, D7D Cycles with Dean Dodson in San Lorenzo. I built custom road and track frames and Dean was the painter ( he has since passed away, but he was one of the best bike painters in the USA.) We were successful in getting most of the work from the US importers of frames from Guerciotti, Ciocc, Rossin, DeRosa, etc where we repaired and repainted frames that were damaged in transit. Our work was such that the importers started to import bare frames for us to paint as their dealers preferred our finishing and quality better than the factories.

We also were contracted to paint all of the 7-11 team bikes, and I made frames for Eric Hieden and 7-11 team members. I left D&D in 1984 to work for True Temper in the uS to redesign their bicycle tubing line. I also worked for Easton Aluminum, Schwinn Paramount Group and others designing bikes and framebuilding tooling. I then was recruited to move to Taiwan as previously mentioned to work. I was lucky as I got to travel the world on bicycle related business and become friends with the Shimano, Campagnolo and Day (SRAM) families..I got meet and spend time with Eddy Merckx, Felice Gimondi and others that I admired and respected. A lot of the 7-11-Motorola team members, especially Bob Roll, are still good friends. I had a really good career for in the business (I&#8217;m 58 now and mostly do design and engineering work outside the bike industry).

As for your bike: The Titanium Pro was my personal project. The frame design for the time had a steeper head tube angle and the sloping top tube&#8230;an early &#8220;Compact&#8221; design direction that is so popular today&#8230;my reason for the sloping top tube was to keep from injuring your &#8220;private parts&#8221; when a quick exit off the frame was necessary! But really for extra room to lift the frame over obstacles when necessary&#8230;I had a bad experience with a level top tube and never forgot it. But the sloping top tube did allow for a bit lighter and stiffer frame, but this wasn&#8217;t the reason for it.

Your frame was built in the Tri-Cities area of Eastern Washington state by the Sandivik Corporation. Sandivik (I believe a Swedish company) had a titanium processing group there because of the Nuclear Power industry that was in the area that supported the very large aluminum industry in the area with power (this was because of Boeing being in Seattle, and in WW2, ther was a large hydro power dam built there to support the war effort in aluminum manufacturing for the west coast aircraft manufacturers. I found Sandvik true my friends at Dean Bicycle, who was having Sandvik build all the Dean Titanium frames. I found that Sandvik&#8217;s TIG welders were some of the best I had ever worked with. So I contracted them to build all of the Kastle titanium MTB frames. Only 25 of the 18&#8221; frames like yours were ever built.

We shipped the bare frames to Italy and built each one to our dealers specification. I offered both the Shimano XT and SunTour groups as options. I used either Spinner or Rock Shox forks as options. I believe the rims and tires were from Ritchey. Other parts were selected by me as needed. BTW, the &#8220;Dan Falvey System&#8221; means that , besides good handling frame design, that all of the parts specified on ergonomically sound principles. This meant that the handle bar width, stem length and crank arm length were adjusted to the size of the frame, instead of a one-size-fits-all approach. This meant more work for me, but our dealers loved it.

Unfortunately, I don&#8217;t have any pictures of your bike&#8230;I will look for the catalog from that era and scan it in if I can find it. Sorry about that. But I will say that you are the second person in the last month that has contacted me on Kastle bikes. An American guy in Atlanta had imported one of my Road bikes from Switzerland and was looking for information. BTW you can see some of my more current 3D CAD bike work at www.grabcad.com...just serch for Dan Falvey and it will bring up some digital old-school frames I did.

BTW, I found out a couple of years ago I have a Polish family connection. It seems that my mother&#8217;s grandmother was a Pole from Danzig, which I believe is now Gdansk? Anyway enjoy your Kastle bike&#8230;it&#8217;s a good one!

I go back to the days (1976) when the founder of Specialized, Mike Sinyard, pre-Specialized days in fact, use to sell me Cinelli bars and stems from the back of his VW van; I started D&D cycles with Dean Dodson ( Dan and Dean, ie. The name D&D) with a $5000 investment which really was the catalyst for my jump from being a junior aerospace engineer to a career in the bike industry&#8230;I had injured an ankle pretty badly at work in 1981 and was off on disability while I was going thru two years of surgeries and rehab to try to fix the ankle&#8230;I was bored and was doing some part time work on weekends when I met Dean. He told me he was a painter for the family business&#8230;I gave him an extra Pinarello frame I had to paint&#8230;when he returned it to me , painted in a deep blue metal flake color&#8230;.it was absolutely beautiful&#8230;since I could build and repair frames&#8230;we talked and decided to start up a company.

Within a year, we had accounts and customers from all around the USA. And the early &#8220;Grape&#8221; and &#8220;Sky&#8221; camo paint jobs on the first production Ritchey mtn bikes came from our shop. The company was bought by one of the assitants, Rick&#8230;and here is a video off where it all started&#8230; http://youtu.be/fTGtoTlJyh0 ...I designed and installed the paint booths and equipment in the shop in 1981&#8230;Rick is still using it&#8230;but when I owned the shop it was spotless&#8230;But thirty years of painting takes its toll I guess. Kelly mtn bikes also used the shop after my time to start the Kelly line of bikes.

While at D&D, in 1981 in we went up to Davis and met with John Scott Finley to pick up some frames to paint that Ritchey had built&#8230;they were actually stored in an old chicken coop on the property! (http://bikinghistory.com/exhibits/show/ ... nley-scott) John was really the father of California mountain biking&#8230;he was taking touring bikes he modified into the Sierras in the mid fifties..I saw the pictures he took on his trips back then. I took one of the unpainted Ritchey frames and built it up&#8230;every person that saw it wanted one.

During the same time , about a year later, I was phoned by my friend and fellow frame builder, Tim Neenan, to come down to the new Specialized facility in San Jose (the second warehouse location before the company moved to Morgan Hill, CA) I met Tim there and he showed me this new mtn bike, called a &#8220;Stumpjumper&#8221;. We went out in the parking lot so I could take a little spin around the asphalt on Tim&#8217;s new creation&#8230;I promptly went &#8220;single-track&#8221; on the bike in the pasture next to the warehouse&#8230;pissing off Mike Sinyard, but making Tim laugh his ass off&#8230;this was the first Stumpjumper&#8230;and the same bike is now in the Smithsonian Museum in Washington, DC.

As for your frame: I am glad that you put the proper forks on the frame...as that is what the the frame was designed for...a fast single track with front suspension...while I respect the effort that goes into fully suspended bikes...I prefer a "hardtail" with front suspensions&#8230;btw, the original Titanium Pro had all purple decals&#8230;and the bars and stems were anodized purple as well. I also used a Chris King CNC seat post clamp in purple anodized color. I am looking for the frame design drawings for this bike and will send you them if I can find them&#8230;I just had a major hard drive crash on my backup drive, which was pretty new, and I lost some of my previous work and pictures&#8230;but I had enough data on dvd&#8217;s backed up that I&#8217;m now reorganizing on a new disk&#8230;anyway, I will see what I still have.

In the meantime here are a few pictures that I still have &#8230; one is of the fastest Kastle ever made&#8230;a benefit of working for Luciano Benetton&#8230;free vip passes to all the races
flavus
flavus 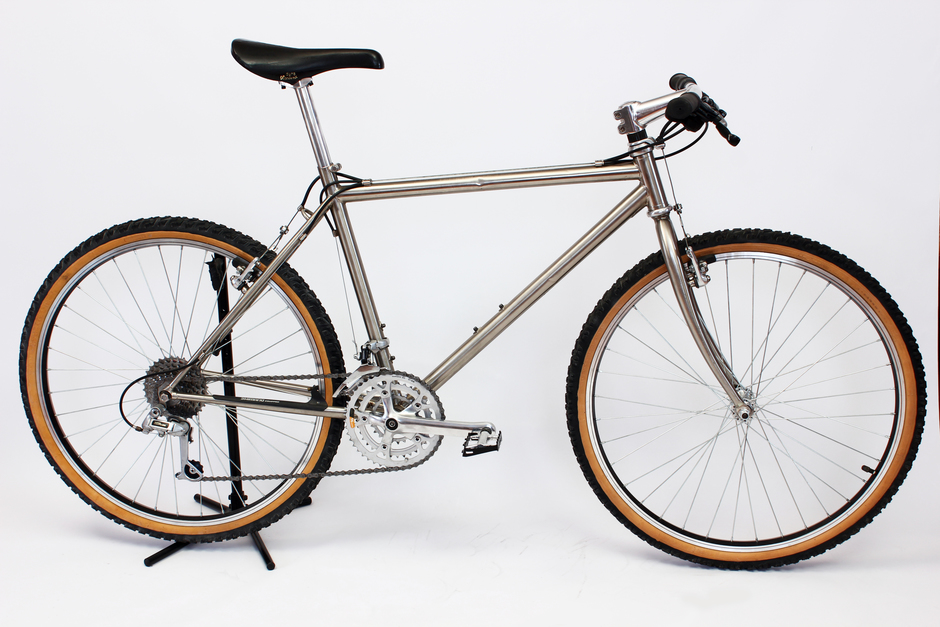